Oregon’s Unemployment Drops to 7.7% in August

Devastating wildfires have ravaged workplaces, homes, communities, and more than 1 million acres of land across Oregon over the past several days. The personal and economic disruption caused by these disasters is not yet known but will certainly have an impact on Oregonians! Oregon’s unemployment rate peaked at 14.9% in April but has steadily decreased as businesses began reopening in May 2020. While it is certainly not back to the low of 3.3% in February, it is still considerably better with an unemployment rate of 7.7% in August. Meanwhile, the U.S. unemployment rate dropped to 8.4 percent in August from 10.2 percent in July.

Oregon’s total nonfarm payroll employment rose by 11,300 jobs in August, following a revised gain of 17,700 jobs in July. Over the past four months, employers added back 41 percent of the jobs that were cut in March and April.

However, several key industries experienced substantial job losses in March and April but have not rebounded substantially or have even declined further over the past three months. The following industries shed jobs between April and July: government (-5,200 jobs); manufacturing (-3,100); and information (-1,900). Most of the other major industries have regained fewer than 5,000 jobs each over the past three months while regaining less than a third of jobs lost during March and April. These industries include construction; financial activities; private education; professional and business services; and transportation, warehousing, and utilities. 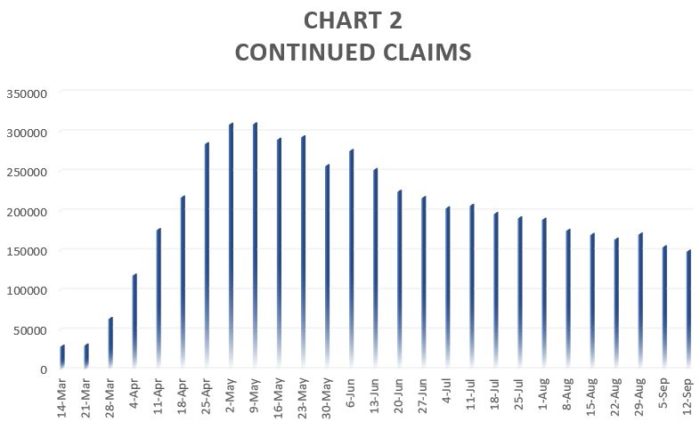 Although Oregon has regained more than a third of jobs lost in March and April 2020 at the onset of the COVID-19 pandemic, how quickly Oregon will return to full employment depends on many unknowns. According to the Office of Economic Analysis’ June 2020 Economic and Revenue Forecast, three recovery scenarios emerge. As social distancing measures continue to be lifted, consumers will be able to unleash pent-up demand, spending on services they previously could not, which is key to economic recovery. The widespread availability of a vaccine or medical treatment could further restore consumer confidence and lead to a speedier recovery. Conversely, a resurgence in the number of coronavirus cases could trigger a second round of business closures throughout the state, leading to a deeper recession and slower recovery.

Bluestone and Hockley Real Estate Services is committed to helping our tenants and property owners navigate these challenging times. For more information on the state of the economy, impacts on commercial real estate, and other relevant information, visit our blog.

We’d love to hear from you.